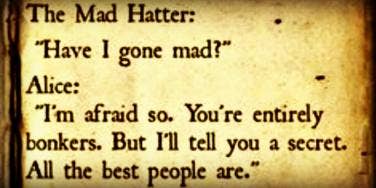 And you thought it was a story for children.

We all grew up with Disney’s Alice In Wonderland as the defining inspiration for living room tea parties, but the best Alice in Wonderland quotes are the ones that stuck with us through the years.

RELATED: 14 Inspirational Quotes That Prove We NEED Fairy Tales In Our Lives

We donned our favorite Little House On The Prairie costume and gathered our entire collection of stuffed animals around a sprawled out blanket, and merrily passed around air crumpets and air scones with a topping of air whipped cream to chase with our air tea in dainty plastic cups. (Or maybe that second part was just me.)

As much as we may remember that the Disney version is based on Lewis Carroll’s Alice’s Adventures in Wonderland, we tend to do so with a wink-wink and nudge-nudge as we associate that portion of Alice’s history with the hookah smoking caterpillar and LSD reminiscent treats.

Yet, there are so many deep and fascinating elements to Carroll’s work that go far beyond some flip drug trip.

Notably, Alice is considered by many to be one of the best examples of the literary nonsense genre, “a broad categorization of literature that balances elements that make sense with some that do not, with the effect of subverting language conventions or logical reasoning… The effect of nonsense is often caused by an excess of meaning, rather than a lack of it.”

Meaning, the original Alice is so jam-packed with meanings, not only is it impossible to fully interpret, but it is an absolute gold-mine of life truths that ring with remarkable clarity still today, more than 150 years later! No wonder I have found myself far more often than once downloading some good old inspirational quotes from the Mad Hatter, Rabbit, Caterpillar, or Alice for future Facebook posting or texting to a friend.

That girl Alice knows what’s up, even when she has no idea which direction she’s headed in. I can totally relate to that, especially with the best Alice in Wonderland quotes on hand. How about you?

RELATED: 25 Life-Changing Novels EVERY Woman Should Read By Age 30

Arianna has been featured in interviews for FOX News Radio, Huff Post Divorce, CNBC.com, and Parents.com. Her articles for YourTango have been syndicated on top sites such as xoJane, ThoughtCatalog, Popsugar and Yahoo Style.