There is no magic formula for a successful committed relationship. There is no definite type of a woman that men want to have by their side. You don’t have to be high value or possess something special to make a man fall in love and commit.

After all, all long-term relationships are very different from each other. Not all women and men think the same way, love the same things and function the same. What I am trying to say is that there is no accurate formula in order for a man to fall in love and commit. It all depends on the individual.

It has probably happened to you that you started a relationship thinking that was it, you’d found the right man but at the end of the day, you were disappointed. Either he or you didn’t feel the same. You weren’t on the same page and something you hoped to be forever turned into a complete failure.

You can’t blame this on the man and you can’t blame it on you either. It just didn’t work because the two of you couldn’t make it work. Maybe one of you didn’t try as much but the point is that it was easier to give up than to try to save something that wasn’t worth saving.

Although there is no definite answer for how to get love and commitment, there is relationship advice which can point you in the right direction. Maybe you haven’t paid attention but the reason why many men fall in love is hidden in the special traits many women possess. So, it’s only logical to assume that some of these traits represent something men crave (well, most of them).

What makes a man fall in love and commit to a woman? 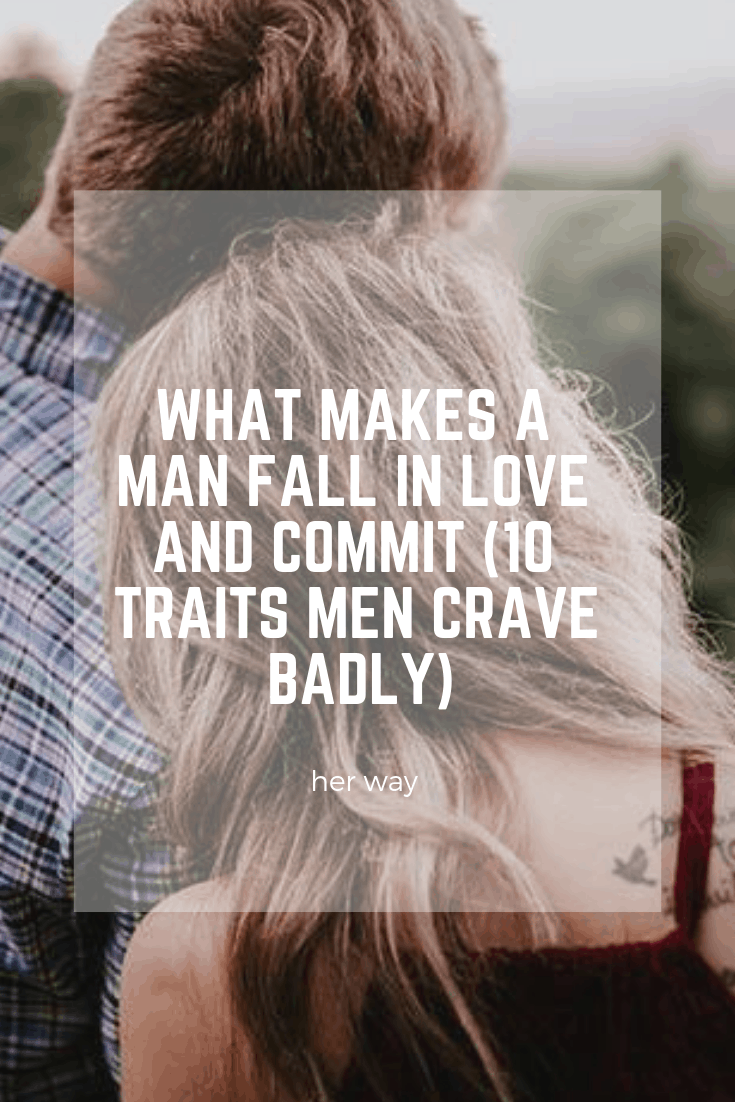 1. They have so many different qualities

Different meaning opposite. They are not just one. They don’t always act the same. They are prepared to act according to the situation. For example, these women have the front of a nice girl, a kind one who wouldn’t hurt a fly, but underneath all of that, there is a hint of a bad girl. These women are the perfect mixture of both. Men adore these qualities in a woman.

For example, it’s like talking to a woman who’s extremely smart but (sadly, because of stereotypes) you don’t expect her to be hot or to party like an animal. So when a guy meets a woman who has these contradictory qualities, they go crazy for them immediately. Men don’t like women who only know how to do one thing and live according to only one rule.

Also, if you’re too hot or too nice, if you’re one thing only, it shows that you are insecure. The perfect woman is a mixture of a little bit of everything which also shows that she is confident about herself and that she can be whatever she wants to be.

2. They have motherly warmth

Sure, wild sex and crazy kissing is okay but not all the time. All men, deep inside, want to be taken cared of and cherished. They want to be caressed, they want a woman to look them in the eyes when she touches them.

Men want to feel that motherly vibe in a woman because they are going to feel safe. And women who know how to make them feel protected and warm are the ones they like the most. Maybe they are not even aware of what it is they crave but they are programmed to feel that way.

Their emotions have a power you can’t even imagine. If they want, using their feelings, they can turn a man away from them or make them closer to them than ever. It’s all in the way you express yourself.

The main trait of a woman who’s attractive to most men is that she knows how to communicate emotionally on a mature level.

She won’t act like a girl if something isn’t going her way and she won’t overreact to a serious situation. These women don’t smother or cling to men. They balance their emotions and create a perfect middle-ground.

Men love women who are honest when it comes to their feelings. They can’t resist if they see a woman who is not afraid to open up and give a man permission to see what goes around inside her head.

Even if they are scared of opening up, they will do it, because it’s the only way to show a man how they feel and what they think about them.

These days, most women, most people, keep things to themselves. They don’t want to expose themselves to anyone because then they can get hurt more easily. So, when women close themselves up, they take things too far and unintentionally they reject a man who is interested in them, which is understandable.

If a woman doesn’t show vulnerability, a man can’t take care of her. And when he has no one to take care of, chances are he’ll leave you.

5. They know how to give a man space and freedom

When you are in a committed relationship, it doesn’t mean that you have the right to rule over your partner and make decisions for the both of you. These women know that and they know that in order to make a man fall in love and commit, they have to give them some space. Men function like that, unlike women.

When a woman is hurt, she will have the need to talk it out with someone. She’ll crave emotional support and understanding but when a man is hurt or has some kind of a problem, he’ll close up. He’ll try to find a way to deal with it on his own.

That’s why you need to give him some space. If he comes home irritated and you see that he has a problem, let him sort it out. Once he’s done, he’ll tell you all about it. If you bother him with millions of questions like, what’s happening, why are you acting all weird, you’ll only make him feel worse and you won’t get an answer.

Let him lock himself up in his man cave and deal with his shit alone.

These women know how to be by themselves. Let’s make one thing clear, men enjoy being needed, I mean who doesn’t? But that neediness has to stop at some point.

You have to draw the line where that neediness becomes obsessiveness. Men fall for women who do everything by themselves but are not afraid to ask their help when they need it. These women will include a man in their life but they cling on to theirs.

So, before you’ve talked about commitment, you have to show him that you can manage perfectly by yourself, that you don’t need a man to take care of you.

Men find this extremely sexy. It’s a bit contradictory since they want to have someone to take care of but if you become just that, a person who needs to be taken care of, they will lose interest in you instantly. Neediness is not an attractive trait but independence is.

7. They make a man happy

This doesn’t seem like a trait but if you make someone around you feel happy and comfortable, it means you are a pleasant person and that is a trait and a very attractive one.

These women know how to create a situation in which their man will realize he is happy around them. They will evoke deep emotions which are hidden inside them and if they leave, the man is going to miss that feeling. When this happens, it’s commitment bingo!

8. They know how to value and appreciate someone

Men need the feeling of being appreciated. They need someone by their side to help them achieve what they want. They need a woman’s support, emotional and any other kind. Women who show them these things are keepers in their eyes. This is closely related to kind of boosting their ego.

If you want to win his heart once and for all, compliment him. Tell him that he is successful, attractive, make him feel important about himself. He will only love you more. You will leave the impression that you trust him and his judgment and that you are convinced he is capable of doing great things.

But don’t overdo it with the compliments. They can get old if you keep on saying the same thing. Keep it natural and from time to time let him know what you feel and think about him.

9. They will never try to change someone

He needs to know that you trust him and that you are comfortable with the person he is. Women who know how to get a man to commit do exactly that. They give them just enough liberty not to lose themselves. They know they can’t try to change people and that every one of the men they meet has some kind of a flaw.

You have to make him believe that you like him just the way he is. Assure him he doesn’t need to change who he is to fulfill your expectations. He will appreciate that you understand him and that you are happy with him for who he is. This will definitely make him want to commit to you, because frankly, a woman like this is really hard to find.

10. They know when to let them step in

As it has already been written, men need to feel useful but they don’t want to be taken advantage of. It’s a huge plus if you are independent but look at it from a different perspective.

If you’re too independent, he will get the feeling that you don’t need him and it may cause him to pull away in the early stages. You have to play this smart.

These women know exactly how much of their independence to show in front of a man. They know when it’s the right time to let them step in and do something for them. They know how to make them feel needed but just the right amount. Be smart and try to do the same thing.

Luckily, these are the traits that someone can learn and adapt to, so it’s not impossible to use them to get a man to fall in love with and commit to you. Work on yourself and you’ll definitely make it.

Leo and Taurus Friendship | 3 Minute Guide
7 Tips | How To Get a Sagittarius Man To Chase You Again
What does Zodiac say about the way your partner expresses their love for you?
A Ranking Of Zodiac Signs That Make The Best Romantic Life Partners