You have no clear evidence that something is going on with your boyfriend but you simply know that things in your relationship aren’t looking so good lately. Your gut and intuition are telling you that he is about to leave you and here are 6 painful but sure-fire signs that you are not imagining things or being paranoid.

One of the first signs that your romantic partner is about to give up on you and your relationship is his sudden emotional unavailability. Lately, you feel like he is distancing himself from you and like he isn’t letting you in the way he used to.

Before this started to happen, you almost felt like this man was a part of you. You could literally read his mind and he shared everything with you. But now, things have drastically changed. Now, you feel like he is a complete stranger who keeps everything to himself and you can’t seem to find a way to reach out to him.

When you are interested in keeping someone around and in making a relationship work, you’ll do everything in your power to put an effort into making this person happy and making this relationship successful. And men are no different.

But lately, your boyfriend isn’t trying anymore. He doesn’t do nice things for you anymore, he’s stopped being romantic and it is like he has started taking you for granted.

When the two of you argue, he is never the one who initiates a reconciliation. He’s stopped putting any effort in and he’s started acting like he couldn’t care less if your relationship fails.

3. He doesn’t listen to you

Another painful sign that he is giving up on your relationship is the fact that your boyfriend simply doesn’t pay attention to you the way he used to. Whenever you try to talk to him, you feel like you are just boring him and as if he doesn’t listen to a word you say.

It’s like this guy doesn’t care about your opinions or attitudes anymore. He doesn’t even have the decency to ask you about your day, let alone anything else—and this is a clear sign that something is wrong. 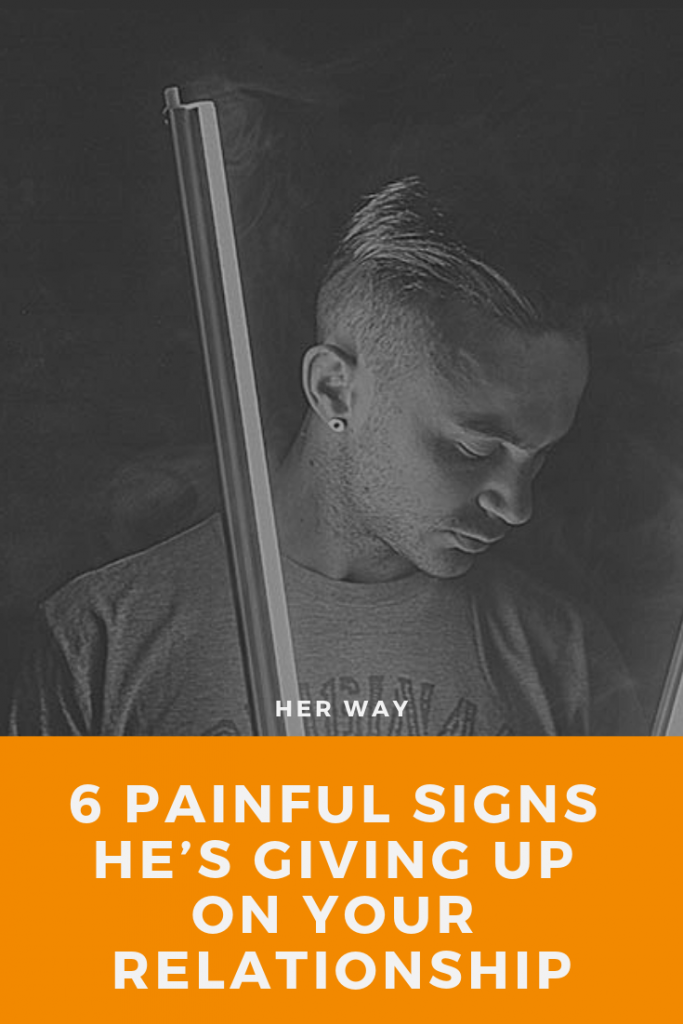 4. He is picking fights

If your boyfriend is constantly starting unnecessary arguments and spends all your time together criticizing you, one thing is clear—he is about to give up on your relationship. It is pretty obvious that everything about you has started to bother and annoy him.

But this is something he doesn’t want to tell you or maybe even something he isn’t aware of, so he channels his negative energy by picking random fights with you. If this is the case with your relationship, you might think that there is something you should change about yourself for this to stop happening. But you couldn’t be more wrong—the only thing you ought to change in this kind of situation is your boyfriend.

When you have a boyfriend who completely avoids fighting, you might think that this is a great thing. But there is a difference between choosing what battles to fight and between completely ignoring any disagreement in the relationship.

But your partner acts like he doesn’t have any interest in improving your relationship and whenever you try to confront him about the things that are bothering you, he couldn’t care less. It seems like any type of conversation and dealing with your mutual problems bore him and that for for him, any type of relationship talk is just a waste of his time and energy.

6. He spends less time with you

When your boyfriend is about to give up on your relationship, he won’t only be avoiding fights and communication with you—he’ll be also avoiding you. This guy will spend less and less time with you and will act like he doesn’t feel the need to see you like he used to because he wants to break up with you sometime soon.

Lately, you feel like you are forcing your partner to spend time with you and as if you are always the one initiating all of your dates and get-togethers. On the other hand, it is obvious that he prefers spending time with his friends or doing the things he likes, without including you. If this is the case with your relationship, it is more than clear that he is okay with losing you.